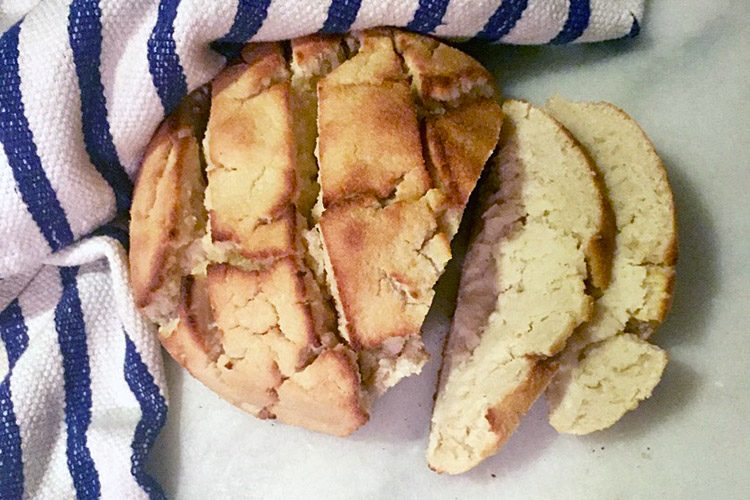 I spent part of my teenage years living in Paris, where the shelves of bakeries are lined with a mind boggling assortment of glorious, glutenous breads of every variety. In the morning, customers -sometimes shoving to get ahead in line – placed their orders with the same level of urgency and complexity as commuters ordering their coffee at Starbucks. I, like pretty much every one else in my neighborhood, always ordered an extra baguette, half of which I would eat warm before I even got home. 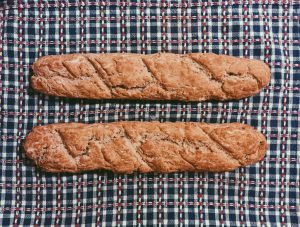 I can no longer eat traditional baguettes, I do pause in front of the many fine bakeries in San Francisco where I live now, just to smell, and smile. That is all I need to remember the crusty exterior, and fluffy, chewy interior of the breads I used to love. I then walk on, with hope and inspiration, because I believe someday science will catch up, and I’ll be able to eat those things again- and because in the meantime, I’m not missing out on much. l just have to make it at home with different ingredients.

This recipe, from the cassava flour company, Otto’s Naturals, is the best grain-free or gluten free- baguette recipe I have found (other than mine.) When it comes out of the oven, I could easily devour a whole loaf. It is crispy on the outside, and chewy on the inside. A friend from Paris tried it, exclaimed it was as good as in France, and didn’t even know it wasn’t made with wheat! As a plus, it lasts longer than a regular baguette, and is easy to rejuvenate by running it under water, and putting it back in the oven at 350 degrees.

I follow the recipe exactly, except that I use a baguette pan instead of a sheet pan. My only other note is that I haven’t been able to get mine to double in size, as the recipe instructs, but it was still good!

Note: Cassava flour is quiet difficult to digest, and doesn’t have much nutritional value. So, if you have tummy issues, keep an eye on how much you eat, or try my recipe which uses a blend of almond, tapioca, and coconut flours.

Place warm water in a large bowl. Sprinkle yeast and coconut sugar on top. With a wooden spoon, stir in 2 cups flour. Once combined, add the salt and 2 more cups of flour, until a dough firms.

Gently knead dough for eight minutes on a floured service, adding more flour if needed to keep from getting too sticky. The dough will not be as elastic as regular gluten flour, and it will seem to crumble if you pull it and fold it the way you would normal . Instead, push down gently on the dough, turn it, push down, flip it over. Add more flour as as needed. Pick up the dough and drop it on the floured surface several times, dropping it on a different side each time, so it forms a smooth-sided cube-shaped loaf, and then depress and do it over again. Shape the dough into a boule and place it into a bowl. Cover with a clean kitchen towel, and let rise for 45 minutes. Preheat oven to 375.

Shape baguette into a long thin log and place in either a baguette pan, or on a baking sheet. Let sit for another 15 minutes under a clean kitchen towel. Make several shallow slices on the surface of the crust. Place in oven and bake for 20-35 minutes.